In this CNC age, the mechanical means that allow for precision and relative economy in production create a situation where the uniqueness and identity of any manufactured goods are open to attack by pretenders and competitors. That's the price you pay for handing the keys of the factory over to robots. 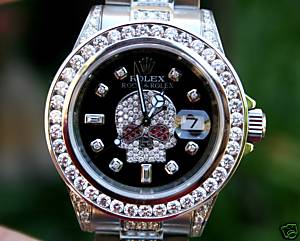 Skilled replica factories in Guangzhou crank out fakes of very limited edition Swiss watches from photos in magazines weeks after they are launched. An exotic hyper-luxurious wristwatch that may have been produced in a 25 piece run in a Geneva atelier shows up in street markets by the hundreds, with 1 micron thick gold plate and a few misspelled words on the dial. Whatever. Bejing taxi drivers deserve Audemars Piguet as much as the next guy.

Sometimes, it is suggested, the very factories that create name brand clothing and electronics during the day turn out unauthorized bootlegs at night, virtually indistinguishable from the real thing because there is no distinction. Koreans did it, the Chinese are doing it, and it probably happens wherever you are too.

What would Walter Benjamin have to say about all this?

In the old days, god-given talent, hard-won mastery with tools and materials, and secret recipes handed down in closed groups were potent barriers to imitation. Now all that is needed is a CAD file and you're good to go.

Replication has come to the fore in recent years in audio with the rise in interest of
Western Electric equipment. This stuff was rare before it got famous and now even if you have big money it is hard to find good quality specimens to purchase because the fever has spread worldwide and ready buyers far outstrip the negligible supply.

You can sell a Western Electric knob for $50 on ebay. Sellers randomly tack "Western Electric" onto descriptions of anything that they can get away with in cheezy lowball attempts to rake in some stupid money. Altec horns are now Western Electric Altec horns. Even RCA, WEs main competitor and enemy is now RCA Western Electric. Any horn, field coil speaker, or tube socket is somehow related to Western Electric in the cynical  fantasy minds of many ebay sellers. Can this crass tactic actually work? 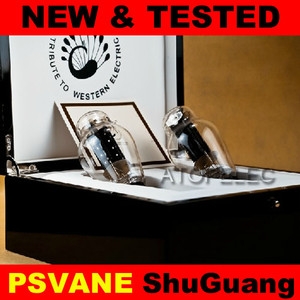 Old WE 300Bs cost as much as a nice used car and even a pair of the 1990s authorized reissues is worth more than my decrepit Volvo, which isn't saying much. Now, Psvane makes a dead nuts Chinese copy of a WE 300B that they imply uses parts from the same sources as WE. $900 a pair. : “100% 1:1 replica of WE300B, including materials, structure, internal and external size – up to the detail of a tiny screw used”.

Those who know tube manufacture understand the process is as important as the materials and many of the original materials are simply not available anyway. The industry that created them is extinct. It is hard to tell what their claim actually is, let alone what it means. Which parts are the same as WE? Or is it the sources that are the same and not the parts? Or the parts are the same from different sources? Obviously, they are trying to attach some of the WECo mojo (and price premium) to an item that has little to do with Western Electric in any significant manner.

WE reproduction has been going on in Japan for some decades with Kanno, Eltus, and others reproducing WE drivers with reasonable quality and high aspirations starting in the 80s. I think Kanno made subway cars and the owner did the WE thing as a hobby. It is not always about money. This sounds like a losing proposition to me but I'm sure it was fun.

Today, the extremists at GIP Laboratory in Yamagata make replica 555s and 597As that are even better than the original units in some ways. They are trying to make 1:1 WE gear that is new and in perfect operating order because a lot of the old stuff out there is broken and worn out, which gives WE a bad name and doesn't capture the magic. I compared their drivers myself and I was very impressed, but they are not much if at all less expensive than the 80 year old originals to which they pay tribute.

Numerous factories in China are cranking out WE replicas also. Line Magnetic is perhaps the most famous practitioner. For many rank and file audiophiles, this is as close as they are going to get to WE and independent of how closely it recreates the particular sound of vintage Western units, it does give people a chance to experience the topologies that WE created. Wide Range horns are a good idea and worthy of exposure, even if it takes replicas to do it.

With  a hundred people looking to buy for every good specimen of ancient WE available, there is a market for replicas and, in audio, there is never a shortage of producers rising to fill any perceived or imagined gap in supply.

In this hemisphere, Aldo from Audio Anthology in Italy makes handcrafted replica 15A horns and Jeffrey from Experience Music down in Memphis is working on 16A replicas. These guys are maniac perfectionists, detail oriented to the max, and willing to sweat hard for what amounts to minimal hourly pay in service of their craft.

However, the repro brigade may have met their match with the Western Electric 12A horn. It is in a different league of complexity. 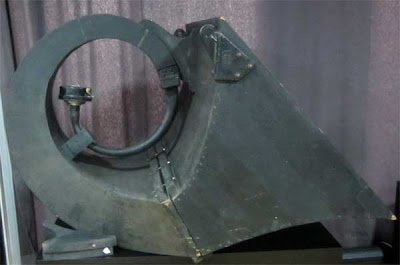 The design and construction of the 12A is insanely labor intensive. I really have to wonder what they were thinking but it surely was not about economy. This horn is constructed of 1" thick hardwood strips. About 1.5" wide on the sides and about 3" wide on the top and bottom. The differing widths of top/bottom and side pieces create a situation where seams do not meet so the wood interlocks in a strong framework. 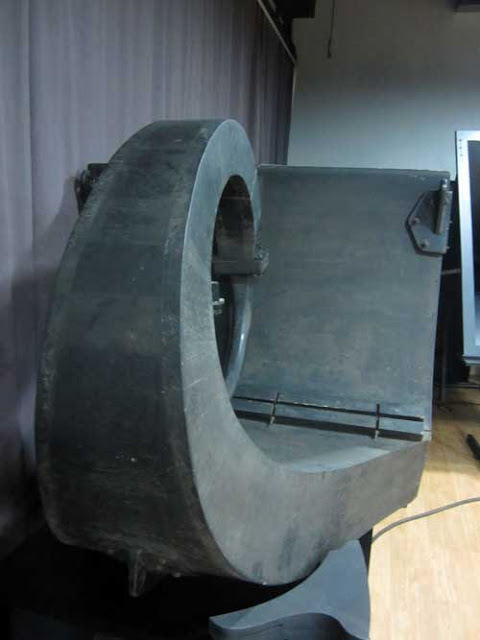 The sides of the horn are not straight either. There is a complex twisting curve along the entire length of the flare. 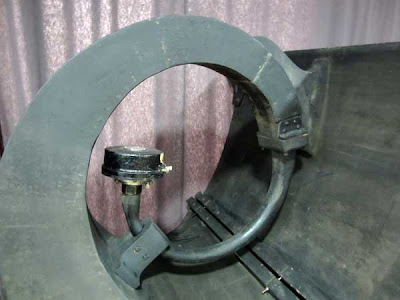 HOW THE HECK DID THEY BUILD THIS?

They must have had templates to cut each piece out of raw lumber, jigs to shape each piece, then they must have put it together in sections and sanded, ground, or planed it smooth. And it is very smooth and very solid. Clearly, the job is well-engineered and minutely planned out, but it is all way beyond me.

I can see filled in nail holes on the sides where they tacked on each side piece. I figure there must be some sort of tongue and groove system holding the top and bottom strips in place.

The completed horn weighs 180 lbs without drivers. The hardware to hang it is 1/2" thick cast iron! 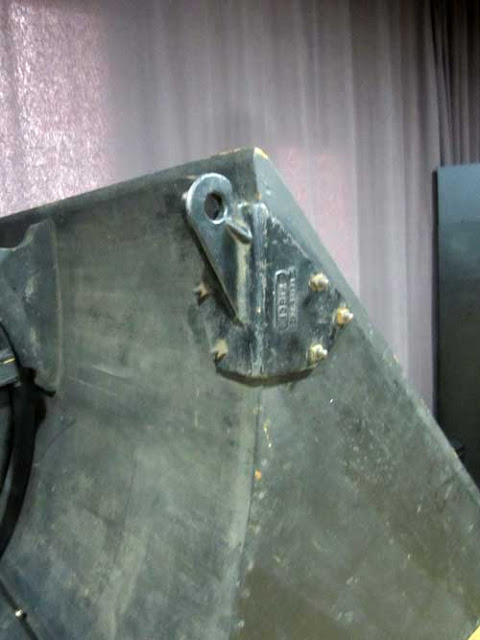 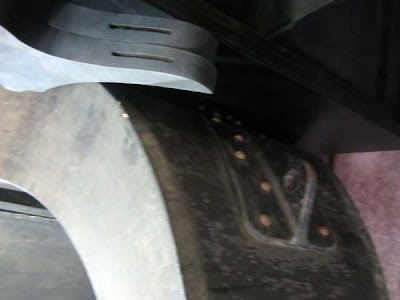 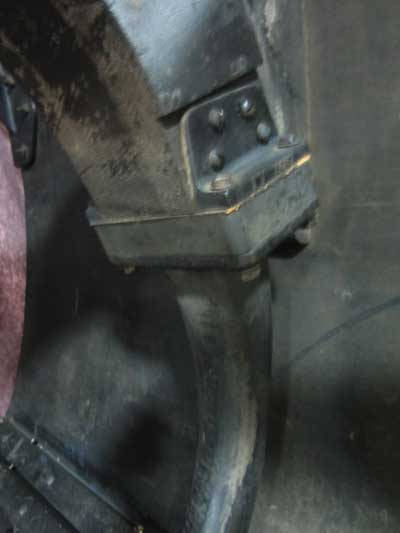 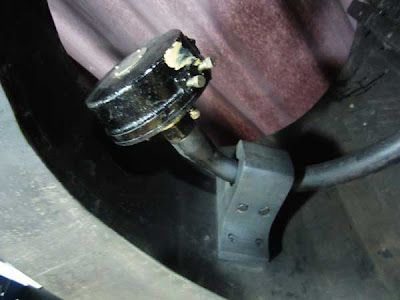 The work of building the 12A appears to have been contracted out to The Victor Talking Machine Company according to a brass label on one of the 12As in the Silbatone collection. Presumably, this outfit was at the top of the game for industrial production of wood items, back when people actually made things out of wood. 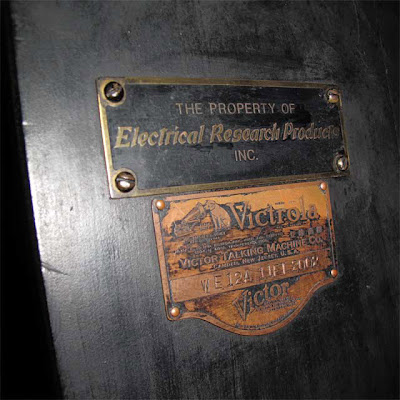 There was a fellow in Korea making copy 12As. I heard that he took an original apart, 3-D scanned each piece, then cut them on a CNC. He quit after the first pair, which took him 6 months to make! Went back to the much easier job of making 15As.

Well, Western Electric did the same thing. Production of  the 12A did not last long, maybe a year. The 15A is obviously much more amenable to mass production, although still an insane product to behold in this day of molded plastic. Today it would be a glass-filled ABS monstrosity that would look like it came out of a swimming pool or hot tub factory.


The 15A construction was patented and you can read all about it here:  US1852793.
In the text of the patent, the 15A is called a light and compact apparatus for the amplification and distribution of sound waves! That's funny because everybody I know thinks the 15A is ridiculously gigantic!

The 15A also went lower than the 12A, with rated response down to 57 hz (must be minus 12dB or so at that frequency), which negated the need for the 13A "bass horn" setup for cinema sound of the day. So although huge, I guess it was economical of space and material. It's all relative, right?

I have found no such documentation on the 12A and obviously I am mystified and amazed by the method of construction. I tend to think that most modern day copiers would move on to easier challenges than this formidable snail horn. Too bad, because this archaic device, the primal ur-horn, is one of the few items that we definitely need more of on this planet!

If it is any consolation, and it's probably not, the mating 13A looks even harder to build! 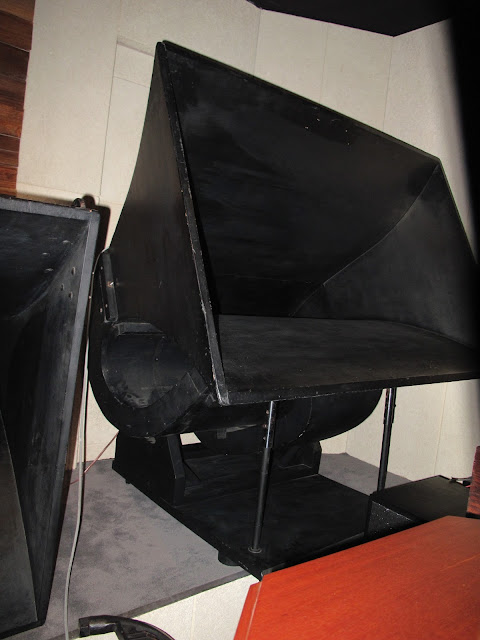